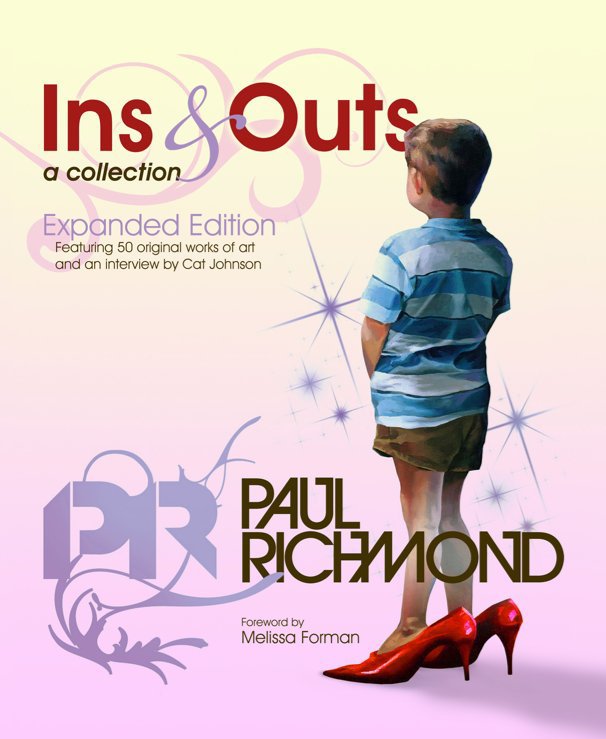 Paul Richmond is a twenty-nine year old artist whose powerful paintings embody the “ins and outs” of a topic at the forefront of current affairs: sexual orientation. Drawing upon his own experiences as a young man who was raised in a conservative, Midwestern environment and struggled to come to terms with his homosexuality, he explores deeply personal feelings, insecurities, fears and triumphs in this collection of paintings.

Richmond came out of the closet shortly after graduating from art college, and his work, which has been exhibited in numerous group and solo exhibitions, was significantly impacted by that life-altering moment. He began using his paintings as a vehicle to explore and understand his own journey and to develop a dialogue with other members of the GLBT community.

This book contains some of his most personal, narrative works arranged in chronological order by the period of his life represented. It documents the journey of a Dolly-idolizing, repressed gay boy as he finds his way out of the closet and into a place of self-acceptance. Accompanying each piece is a description by the artist, explaining the thoughts and emotions behind it. The result is an intimate, visual experience, one that will draw on the viewer to recognize the beauty of discovering and developing their own authentic self, regardless of sexual orientation.

Paul Richmond’s Ins and Outs collection is more than the sum of his art work to date. This book is also the story of his life told pictorially. The paintings show where he came from as a young boy trying to express himself, not being sure who he was, the brave face he showed the world, and ultimately he reveals the man – in all his different layers.

In A World Apart, Paul gives the readers an artistic representation of his earliest days when he struggled with his sexuality, and the uncertainty he faced as a boy, being different from the other boys but not knowing why, since sexual orientation was something he was too young to grasp. He assumed that there was something wrong with him, that he lived in a world apart from everyone he knew.

His paintings are striking as well as expressive as he bares his soul in each section of the book, starting with wanting to grow up and be Dolly Parton when he saw the “Best Little Whorehouse in Texas” at age 5. Dolly represented a safe place and an ideal world and eventually, as an adult, he was able to present the painting on the left to his idol. This experience led him down the road to where he is today – a successful artist.

Paul’s biggest struggle was coming to terms with being gay which was inconsistent with his Catholic beliefs, and many of his paintings show his conflict of trying to be who he was despite his upbringing. His journey is similar to that of other gay men and at times I felt like a voyeur while reading Ins and Outs, as if I were peeking into his home as he walked around naked inside.

His paintings are original, moving, and beautiful and in the book he takes us on his journey from a child to a fully actualized man who knows what he wants, and at 29 he certainly has made his mark. One picture in the book titled First Time Out showed his turnmoil as he tried to reach for his goal but is still repressed and this theme is heartbreaking. In Self Illusion, one of the most poignant paintings in the book, you get the sense that Paul is hiding from himself and the rest of the world by wearing a bold mask designed to conceal who he really is but he doesn’t quite succeed, because the sad and luminous eyes give him away.

In case you didn’t think that Paul has a sense of humour about his life and lifestyle, he did a series of paintings that he called The Cheesecake Boys, a homage to the cheesecake girls in a much earlier time.

Paul’s sexual orientation is a powerful influence on his paintings and these 50 pieces are more than just art, they are who he is.

This collection is well worth buying because it is Paul’s personal journey of self discovery, with all the scars he gained along the way. Highly recommended.

Paul Richmond's paintings have been displayed at venues including the World of Wonder Gallery, A Bitchin' Space, BoMA: The Bar of Modern Art, and the Columbus Museum of Art. His work has also been licensed for concert merchandise, international novel cover publication, and a greeting card line. His piece “Remembering Tammy Faye” was unveiled to celebrity guests at her memorial celebration in Palm Springs, and he helped organize a successful benefit for GLBTQ youth in association with his recent solo exhibition “Ins and Outs.” He lives with his partner Dennis and their two whippet babies in the Short North arts district of Columbus, Ohio